For the chicken:
4 boneless, skinless chicken breasts (if you don’t want leftovers, just do 2)
1 jar salsa of your choice
1 packet taco seasoning, save 1tbsp for the veggie saute

Instructions
– Prepare the chicken in a slow cooker; it’s super easy: put 4-6 boneless skinless chicken breasts in a slow cooker along with a jar of salsa and packet of taco seasoning on high for 5-6 hours. Shred with a fork afterwards. Save about 1 tbsp of the seasoning to use with the saute.
– Cook the quinoa. Bring 1 1/2 cup water to a boil, add in the quinoa. Bring it back to a boil and then reduce to a simmer until fluffy when stirred with a fork (about 9-12 minutes).
– Prepare the ingredients: peel and mince the garlic; shuck the corn and remove the kernels with a knife; peel and chop the onion; remove the kale stems and coarsely chop the leaves; remove the cilantro stems and chop the leaves.
– As the quinoa cooks, heat 2 tbsp extra virgin olive oil in a large pan on medium-high heat. When hot, add in garlic and onions, stirring until onions begin to turn translucent (about 3 mins).
– Add in the corn and remaining 1 tbsp of taco seasoning and stir occasionally about 4-5 more minutes.
– Add in the kale and most of the cilantro (leave some for garnish), folding it into the corn mixture. Season with salt and pepper. Cover the pan with either a lid or by loosely putting a piece of tin foil on top so that the steam is trapped and helps soften the kale quickly. Once kale is soft and turns vibrant green, remove the saute from heat.
– In a bowl, assemble your desired ratios of quinoa, corn saute and chicken. Top with some cheese and the remaining cilantro.

Feel free to reach out and get a free 15 min consult!  I want to meet you and give you at least one tip that will get you closer to weight loss or healthy feeling body.  Contact me. I’m just like you. 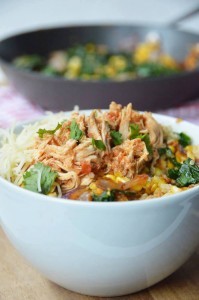 We want to do our best for our loved ones but yet, we are not taking care of US women! And gaining the worry/mommy bump or pouch.  Don't stress, in fact relax, join us and get permission to get amazing results you and your family deserve. When you are happy, every one is!

Stay with me and I will be on your side, motivating you every step of the way! I'd be honored to support you in your health and weight loss journey.  I welcome all sizes - we are all important!

sign up and get 3 of my best tips, free!

You can Definitely Lose Weight